Second Annual Motion to Strike Scores a Win for Charity 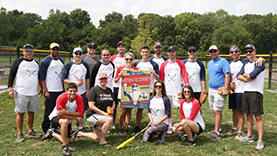 FBMJ senior attorney Dan Cortez went 3-for-3 with a two-run triple for the good guys as the defense attorneys beat the plaintiff lawyers 7-6 in the second annual Motion to Strike softball game on August 18, 2018. The event pits plaintiff medical malpractice attorneys against those who defend malpractice actions. Chief Judge Robert Colombo and Judge David Allen, both of the Wayne County Circuit Court, also participated in this year’s game. Sponsored by local legal vendors with contributions from the game’s participants, the event raised $1,200 for Cass Community Social Services a Detroit nonprofit agency that provides programs for food, health, housing and jobs in areas of concentrated poverty.

Informal voting after the game resulted in Dan being named MVP. “You just want to go out there and give 110 percent and have fun, and that’s what I did,” said the third baseman. “My teammates were the real MVPs.”