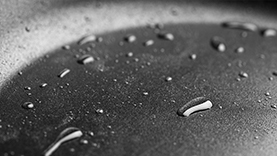 Most contaminants share a common trait: stop its release and the ecosystem will dilute the concentrations or degrade the contaminant until it is no longer a threat to human health or the environment. Yet greater attention and scrutiny is now being focused on the potential harmful effects of poly- and perfluoroalkyl substances (PFASs), substances that appear to be highly mobile, easily enter the human body, and are persistent in the environment. PFASs are a broad group of chemicals used to make products more resistant to stains and water damage. Industrial quantities of PFASs, the two most popular being perfluorooctanoic acid (PFOA), used to make DuPont’s Teflon, and perfluorooctane sulfonate (PFOS), used to make 3M’s Scotchgard, have been manufactured since the 1940s. This combination of factors could create an enormous problem for the scientific and medical communities if it is confirmed that PFASs increase the likelihood of certain medical conditions in humans, even as new production of these compounds is waning.

PFAs are very stable in the environment, low in volatility, and are resistant to biodegradation, photoxidation, direct photolysis, and hydrolysis. Because of this, they are ubiquitous; PFASs have been used in fire-fighting foams, nonstick pans, waterproof clothing, and many other products. Ingestion via water and food is the primary source exposure for humans. Some communities near facilities where PFASs previously were manufactured had high levels of these substances in drinking water supplies, and this can lead to high rates of ingestion for these populations. Similarly, the former use of PFASs in fire-fighting foams, especially on military bases, has resulted in the release of these substances to soil and groundwater. Another common exposure point, especially for children, is PFAS-treated carpets and upholstery through hand-to-mouth transfer. Once present, the most commonly used PFASs remain in the human body for many years.

There have been no definitive studies linking the presence of PFASs in the body to any specific disease or disorder, but testing on animals has produced a number of results that government agencies and industry have found concerning, and have led to a spate of unresolved lawsuits relating to PFAS exposure. In animal studies, some PFASs disrupt endocrine activity, reduce immune function, cause adverse effects to the liver, pancreas, and thyroid, create changes to blood cholesterol and triglyceride levels, and cause developmental problems in offspring exposed in the womb. In particular, the fact that PFASs could be “endocrine disrupters” is a concern, since other such disrupters, such as the pesticide DDT, has been shown to cause cancers and birth defects in humans.

Today, PFASs are considered “emerging contaminants” and are not subject to federal regulation. This is because under the Safe Drinking Water Act it takes years of study to develop enough data on toxicity for agencies like the EPA to enact regulations, and because there are so many PFC and PFA variants, it is difficult to assess the risk potential across the entire chemical class. In 2012, the EPA listed a number of PFCs, including prominent PFASs such as PFOA and PFOS, as suspected drinking water contaminants. In May 2016, the EPA published health advisory guidelines for PFOS and PFOA that suggest prolonged exposure over 70 parts-per-trillion can cause health problems; this is equal to about a drop of water in 20 Olympic-sized swimming pools. Since 2013, an EPA-mandated testing program has detected elevated levels of the chemicals in 52 public water systems across the country; those systems had at least one sample contaminated with either PFOA or PFOS at an amount greater than the new lifetime health advisory level. Meanwhile, states like Minnesota, Michigan, and Alabama have issued advisories cautioning consumers to either stop or limit eating fish from waters containing PFOA or PFOS.

Chemical manufacturers have recently become responsive to concerns about PFASs; and have begun phase-outs of those compounds. In 2006, eight major companies agreed to participate in the USEPA’s voluntary PFOA Stewardship Program, which required commitments to reduce facility emissions and production of PFOA and related chemicals, and to work toward the eventual elimination of these substances. The chemical industry has responded to these phase-outs by shifting production to next-generation PFCs with smaller carbon chains. Small-chain compounds, while still persistent in the environment, are generally less toxic and less bioaccumulative. Although recent monitoring data continues to show widespread human exposure, the US Department of Health and Human Services has observed that the levels of PFASs in people’s blood appear to be declining.