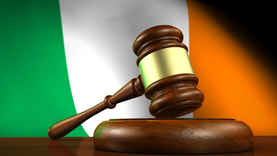 Attorney Joe McGill co-authored an article published in the March, 2017 edition of the Michigan Bar Journal featuring the Incorporated Society of Irish American Lawyers (ISIAL). McGill serves as the president of this specialty bar association comprised primarily of Michigan judges and attorneys with a personal connection to or interest in Irish-American heritage. The article highlights the history of the organization formed in the late 1970s, its mission to advance the administration of justice and civility, its tradition of public service to others, and its members past and present, a virtual “who’s who” of prominent Michigan Irish-American judges and lawyers.

In addition to serving on the ISIAL, McGill serves as Emeritus Director and past President of the Catholic Lawyers Society of Detroit, Co-Founder and Treasurer of the Michigan Irish American Chamber of Commerce/Irish Network, the Vice Chair of the Representative Assembly for the State Bar of Michigan and a member of the State Bar’s Board of Commissioners.

Contact Joe McGill at jmcgill@fbmjlaw.com for more information on the ISIAL.