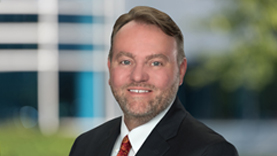 Foley, Baron, Metzger & Juip (FBMJ) attorney Joseph McGill was sworn in as Chairman of the Representative Assembly for the State Bar of Michigan (SBM) at its Annual Meeting, September 27-29 at Cobo Arena, Detroit, MI. The Representative Assembly is the final policy-making body of the State Bar and is comprised of 150 Members which are elected by attorneys in each judicial circuit throughout the State of Michigan. As Chair of the Representative Assembly, McGill will lead its 150 Members through issues which directly impact access to justice and the practice of law in Michigan. “We are honored and proud that Joe McGill was elected to such a distinguished position within the Michigan legal community,” said Clyde Metzger, FBMJ Managing Member.

McGill will also continue to serve on the SBM Board of Commissioners. The Board is responsible for implementation of policy adopted by the Assembly and management of the SBM through the authority granted by the Michigan Supreme Court. He was also appointed to serve on the Law School Deans Committee, Executive Committee and Audit Committee of the SBM.

McGill is a Principal attorney at FBMJ and has extensive litigation and transactional experience in commercial law, business and estate planning, and complex corporate, probate and real estate matters.

In addition to his service with the SBM, McGill serves as President and Co-Founder of the Michigan Irish American Chamber of Commerce, Emeritus Director and past President of the Catholic Lawyers Society of Detroit, Emeritus Director and past President of the Incorporated Society of Irish American Lawyers and past Chairman of the Madonna University Foundation Board. He carries Martindale Hubbell’s AV rating, AVVO’s “superb” rating, and is honored with the distinction of a Michigan Super Lawyer. Contact Joseph McGill at jmcgill@fbmjlaw.com.