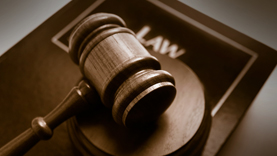 Joseph McGill, FBMJ attorney and member of the State Bar of Michigan Board of Commissioners (BOC), was appointed as BOC liaison to a special work group at the Michigan State Bar tasked with recommending amendments to the Michigan Court Rules and the Michigan Rules of Professional Conduct pertaining to the rules governing Limited Scope Representation as promulgated by the Michigan Supreme Court. McGill presented the proposed changes to the entire BOC at a meeting in Lansing on July 21, 2017 seeking approval of the new rules.

The Board of Commissioners represents the 45,000+ lawyers licensed in Michigan on such issues before the Supreme Court. McGill’s motion for approval was granted, and the changes will now go back to the Supreme Court for implementation in the Michigan Court Rules and Michigan Rules of Professional Conduct. “It’s a big deal for all lawyers in the state, and I was privileged to be part of the process,” McGill commented.