COA: On Campus, (but) Off the Hook 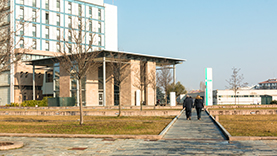 On August 9, 2018, attorneys from Foley, Baron, Metzger and Juip scored a significant win at the State of Michigan Court of Appeals (COA) in the case of Abigail Schmitt v Genesys Regional Medical Center. The appeals court panel reversed a lower court’s decision and granted summary disposition to Genesys Regional Medical Center on the lack of ostensible agency between the hospital and an independent-contractor physician. The COA found the hospital was not vicariously liable for a neurologist who never treated the patient in the hospital, but merely leased office space from the hospital for his practice. This case will serve as additional liability protection for hospitals with physicians and healthcare providers who maintain offices on their campuses.

The Case
Plaintiff was injured on February 19, 2013 when she was struck in the side of her face during a basketball game. During the next few days she began to suffer from headaches and dizziness and presented to her lifelong primary care physician, Dr. Anthony Daros. Daros then referred her to Dr. Henry Hagenstein for a neurological evaluation. The underlying claims stem from Dr. Hagenstein prescribing 80 mg of Simvastatin (a statin drug to assist in preventing stroke) to the patient, who allegedly went on to develop lower extremity weakness.

Plaintiff also claimed Dr. Hagenstein was an agent was because he has a hospital identification badge; the badge allows him access to the hospital parking lot and to secured sections of the hospital where he has staff privileges. He does not wear the identification badge when seeing patients in his private practice, and never introduced himself as a Genesys doctor.

COA Analysis
The Court of Appeals agreed with Defendant that there was no question of fact that the hospital took no action and made no representation to the plaintiff to convey that Dr. Hagenstein was its agent. Although Dr. Daros allegedly told Plaintiff that Dr. Hagenstein was a “Genesys doctor” there was no evidence to suggest that Dr. Daros was speaking on behalf of the hospital or that Dr. Daros was a Genesys physician. “The location of Dr. Hagenstein’s office is insufficient to create an appearance of agency, as are the maps, signs and directory entries that merely aid patients in locating his office,” the opinion stated.

While plaintiff argued that the hospital could create the appearance of agency by omission, the COA found any case law presented by Plaintiff was factually distinguishable because in the cited cases the patient was either referred to the hospital generally or was an affiliated entity which provided specific services; they did not involve a physician referring the patient to another specific physician.  Other factors cited by the trial court and Plaintiff, such as an ID badge, were not in evidence.

While unpublished, the Schmitt case adds another proverbial brick in the wall further isolating hospitals from liability for the care and treatment provided by physicians serving as independent contractors.

Contact Saulius Polteraitis at 734-742-1800 for additional information on Schmitt or other healthcare issues.